What a boring weekend I had. But having nothing to do at least allowed me to finish my other sock. 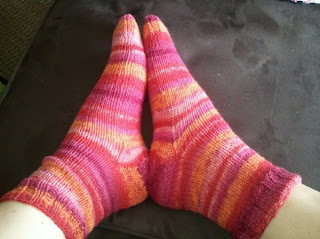 And I busted out my smallest Weavette loom and started puttering around on a project that I've had festering in the back of my mind for some time now. Not sure whether it will work out as planned, so that's all I'll say about it now. 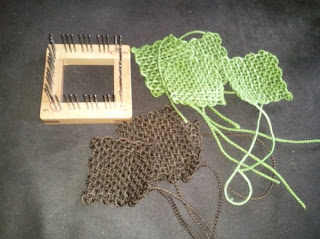 I also got a fresh supply of yarn in the mail from KnitPicks. Yay!! 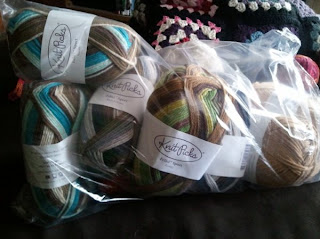 And along with the yarn I got a sock book. 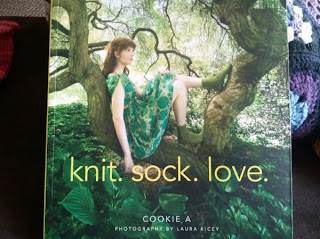 I may be getting a little ahead of myself on this whole knitted sock thing though. This book contains many charts like this one: 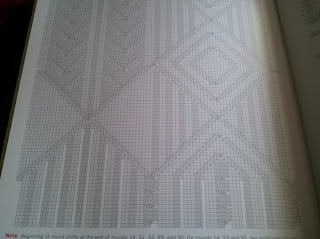 I have conquered the knitted sock

And no one even had to die in the process.


Of course, I did not manage this without help. The book that this sock pattern is found in (Hip to Knit) assumes that you already know how to knit a sock. BUT! We live in the future, and the future contains the Internet, and the Internet has Youtube. And Youtube has this really informative series of six short videos that laid it all out in a way that was extremely easy to understand.  I highly recommend it.

In other news, I figured out a way to warp my rigid heddle loom without having to walk across my entire living room. I attached my broom to a chair with vise grips, and it held really well. Now I can have a warp of whatever length I want. Hooray!! 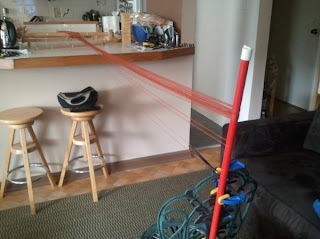 Some things I learned this past week

1. Although crochet is incredibly forgiving, if you use a wildly different yarn and hook size than your pattern calls for, your end product will not be right. The original pattern I was using for my dino hat called for some kind of cotton yarn and a size B hook, but I had a worsted weight yarn and an H hook. At some point along the way I put the thing on my head and it was WAY too big. I have a gigantic head, so I knew this would never work for a baby. So I frogged it, found a more appropriate pattern, and voila:


2. Knitting is just stupid and is nowhere near as forgiving as crochet. It turns out that you can go the wrong way around while you knit, even though you're still moving the needles from right to left. I thought once I was done with the ribbing I'd start to see some lovely smooth knitting, but instead what was appearing was ugly, bumpy purls. After consulting with my sister, we determined that the reason my knitting was showing the purl side was that I was holding all the needles to the front instead of the back. I remedied that, but where I turned the needles from front to back there was suddenly a large gap that would not close up, a phenomenon I still don't quite grasp. So I said some bad words, frogged it, and started all over again.


Things are going better the second time around. 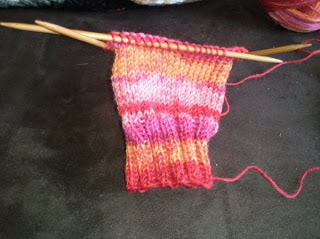 2(a). Sock yarn is blatantly made for knitters. If I were crocheting this sock the stripes wouldn't look nearly that nice. I really don't understand the anti-crochet bias in the craft world.

3. This is a kick-ass brownie recipe that should be tried by all and sundry.
Posted by Michelle at 8:53 AM 1 comment:

Super Bowl sale at my LYS

I trooped on down to Looped yesterday to check out their Super Bowl sale. I got two skeins of sock yarn at 40% off and three skeins of really interesting recycled yarn for 20% off. Woo! 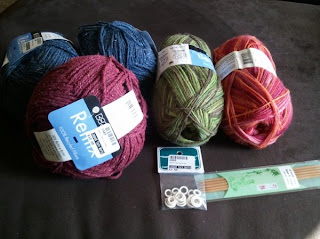