I've FINALLY found the perfect pattern for my huge pile of alpaca. This is so yummy. 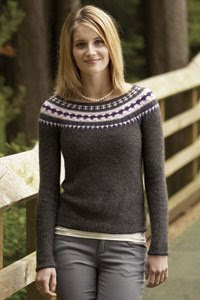 Posted by Michelle at 9:28 AM No comments: 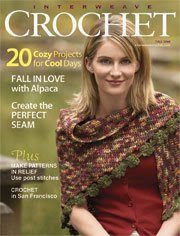 Interweave Crochet started a reader gallery and put out a call for pictures of stuff that people have made from the magazine. So I sent in a bunch of photos, and they liked one ... the black flower choker from many moons ago. So check out page 9 of the Fall 2008 issue. My chin and neck have been published! 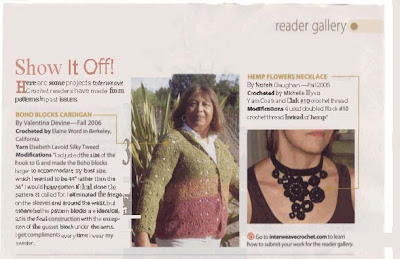 I finished with one set of bobble squares and have moved onto the next. However, I'm not sure I have enough of this fuzzy white yarn. Adjustments may need to be made.
Anyway, here's a little demonstration of how hook size makes a huge difference. The square on the far left is the first one I made, with the same size hook as all the previous squares. It's hugely huge and will need to be frogged and redone. The middle one is done with a hook that's one size smaller. Now I had the right width, but it was still too tall. So I adjusted the pattern and removed two rows. The third square will work, once it's been blocked. I still don't know how these are going to look together, but whatever. It's nice to use up the stash. 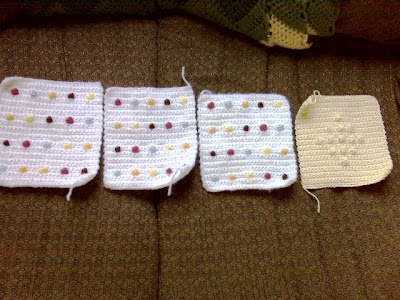 And here's the unholy mess that is the back of these things. 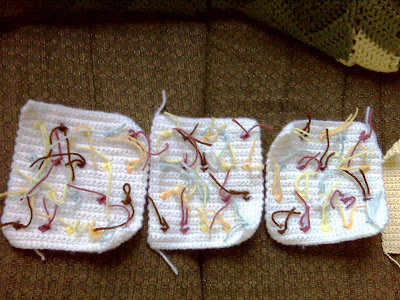 My husband's aunt either gave or long-term loaned me (I have never really known which) an inkle loom, but I haven't been all that interested in making long bands, which is really all you can do with this type of loom. But then I got the latest edition of Weavezine, an online weaving magazine that's showing a lot of promise, and there are two pretty cool things in that issue: a bag that's somehow created out of a long band and a zipper, and shoelaces. I love the idea of making shoelaces for some reason, so last night I tried my hand at making my own heddles and warping the inkle loom. Here are the results. Obviously this won't be shoelaces, but at least I'll see if I like it enough to continue. One of the main things to recommend the inkle loom is that it's extremely portable. 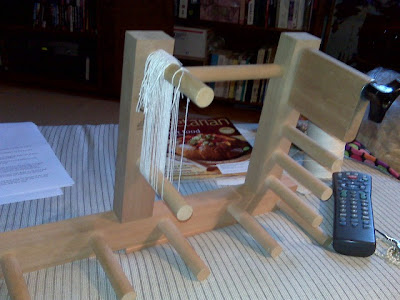 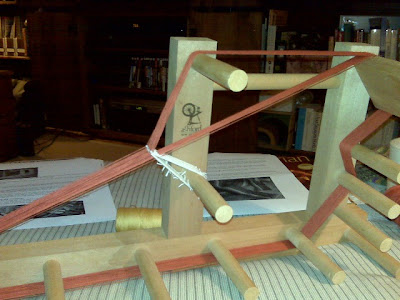 My husband decided that he wanted a ripple of his own for use at the cabin, and since all I had left in the stash bin were hideously ugly colors, I said ok, since most people won't lay eyes on the thing. I've used up all the grandma colors now (literally ... his grandmother gave me pounds of mauve, yellow, and pink) and it's long enough to cover a double bed, but it's still not long enough for him to cover himself completely. But that'll have to wait until I get more leftovers. It's actually not nearly as hideous as I was anticipating, given the poor color choices I had in front of me. And every nine colors I did a stripe of chenille, which sheds all over the place but is nice and soft. 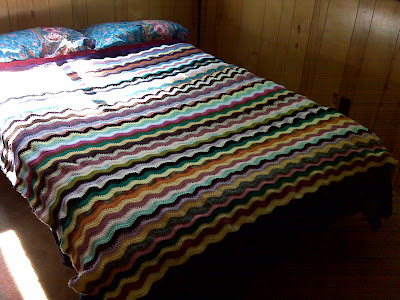 And then I discovered that I have seven tons of shades of white left over, so I'm in the middle of doing a white-themed, bobble square blanket. We'll see if it turns out at all. Otherwise I guess I'll have at least 24 cotton squares to give away as washcloths. 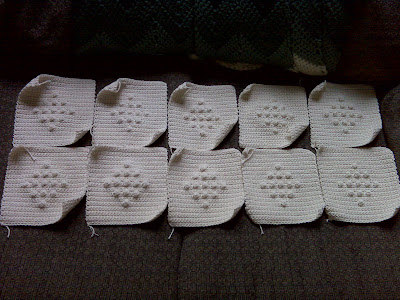 I haven't been a total slacker this summer, just maybe a 75% slacker. Oh, and these pictures were taken with my fancy new Blackberry phone, which I really don't know how to use yet, which is why they're perhaps a tad too dark.