Last week was incredibly hot. On Wednesday as I was at the dentist's office waiting for my appointment, the temperature readout on the local news hit 100. And for days the heat index was around 105. Added to that, over Memorial Day weekend I was very very stupid and stayed out in the sun way too long doing heavy yard work and got a pretty bad sunburn. Added to all THAT, the air conditioning in my building was only working at about half capacity. All this added up to one cranky crafty girl who did nada on any project.

On Sunday I rectified that a little bit.

My cabin loom is apparently pretty old. I have no idea how old, but the strings that hold it all together look like they come from the 18th Century. Last year those strings started to break, and Tech Support and I fixed them as they broke. It was a pain in the rear. So we decided that when I was done with my last weaving project we'd just suck it up and fix the whole thing at once.  It seemed like a good idea at the time.

Shafts 1 and 4 were already done, leaving the two in the middle with the crappy string. We got the shafts out, figured out the byzantine route of the string, restrung the thing, and were in the process of tying off the last eyelet when shaft 4 suddenly went SNAP! With the old string, it went down one side, under a peg-like thing, then there was a huge knot on underside, and then it went back up the other side. I know that's not the most descriptive description.

We thought we were being super clever by securing it at the bottom with a washer instead of a huge ungainly knot. But it turns out that the cord we were using is really quite slippery, and so it slipped the confines of the washer and suddenly the tension and distance of the two sides were totally different.

So we threw our hands in the air and gave up until we can find some more suitable cord, and a better way to secure it in the middle. Grrrrrr.

I also did a nice twisted fringe on the alpaca scarf, but I haven't wet finished it yet. I'm telling you, I was cranky. 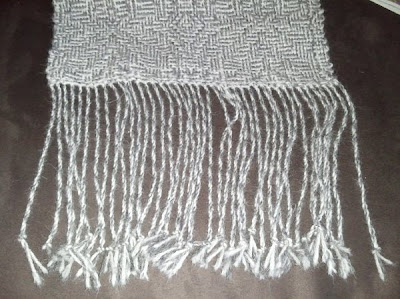 And I made another attempt at the double-ended Tunisian crochet project, but when I got to the end of round 1, I realized that I needed a ton of stitch markers, and I'd forgotten to pack them for the weekend. *sigh* 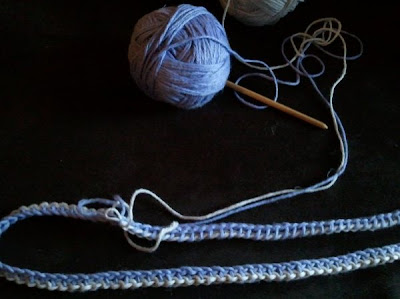 My plans for this week include starting on the Tencel weaving project and ordering a crapload of new yarn and thread for new projects. It's possible I also might accidentally find myself in my LYS on Tuesday for some new sock yarn, assuming it's not a thousand degrees out.
Posted by Michelle at 8:39 AM