My kingdom for a well-written instruction

Grr. The instructions for this thing are so, so very bad. I was doing fine up to this point, where another row is added to one of the motifs. 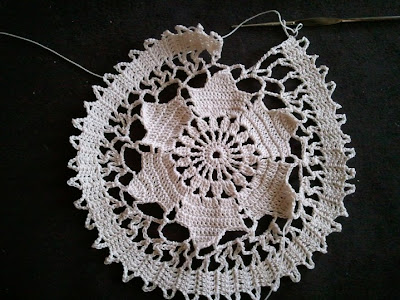 And then that same pattern is continued about 100 times until you're ready to attach to the second, smaller motif. Ok, no problem. The directions basically say to continue around the motif and don't elaborate. 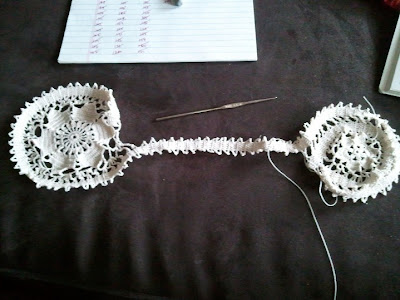 What the directions don't tell you, and what you can see in the diagram if you get out your magnifying glass, is that it's not a one-to-one correspondence between the loops on the motif and where you attach. The first time around I ended up with a horribly bunched-up mess, which prompted me to take a closer look at the diagram. That look wasn't close enough though because I ended up frogging the damn thing four times in all. I have to do this three more times (I think ... the written instructions say to make two but I'm pretty sure that's wrong too) so it should be smoother sailing now that I know where the pitfalls are.
Posted by Michelle at 11:38 AM

I have that same trouble with quilting patterns that are poorly written sometimes - and more often with clothing patterns (on the very rare occassions I can be coerced into making an article of clothing - ick). I will say, however, that once you try to write instructions for something yourself, you realize it's much more difficult than it seems. I'm guessing older patterns didn't have "test creators" the way many new ones do.....which only makes the problem worse. Good luck!

Yes, it's a fairly old publication, and I think it may have originally been published in Japanese, but if you're going to publish something in English, and have it translated anyway, why not spend a little extra cash and have it done well?

Good thing I'm not a newbie or I'd have thrown the book across the room years ago.

Frankly, I find that many knitting and crochet instructions stink