So although I was SURE I was going to be able to finish the alpaca weaving project this weekend, it didn't happen.  Two things happened that were very frustrating and caused me to throw my hands up and walk away after suffering through one repeat:

1. My table loom's shafts are tensioned by rubber bands. And it turns out that if you don't pay attention, after a winter of cold weather, followed by a whole lot of up and down movement, sometimes those rubber bands will break, and if they don't break they will certainly stretch. About halfway through my one repeat yesterday, I glanced at the floor and saw that a rubber band had broken on shaft 1. I called in Tech Support (aka the Husband) who fixed it for me. I then noticed that the rubber band on the other side, all the way in the back on shaft 4, was also broken. Hmm...could this be why I've had such a dreadful time getting a good shed? Tech Support went ahead and replaced all the rubber bands, but then we noticed that shaft 4 was now crooked, so knots had to be undone and retied. *heavy dramatic sigh*

2. Now I have a really nice shed (the space where the shuttle goes through) and I'm weaving along, when I notice that one of the warp threads is looking a little loose. When I was winding the warp there was one point where someone had broken the yarn and retied it. I ignored it and kept winding. Well, that knot was causing problems, and about two inches behind it, things had gotten really stretched and finally broke. I don't have any tools at the cabin to fix this kind of thing, so I just knotted on some fresh yarn, then knotted it together at the other end, then weighted the whole thing with some washers. Hopefully it won't cause any more problems. I'm thisclose to being done, so with any luck I won't break any more threads. I was worried that this would happen a lot more with this yarn.


So after all that drama I went back to my sock.  I made tremendous progress this week.

Getting tired of looking at these same two damn projects? Yeah, me too. With any luck, though, they'll both be done in the next week and I can move on to other things. Maybe the beautiful Babette blanket, which I've been wanted desperately to make for about five years now?

And finally, here are some pretty flowers to look at, currently blooming in Lost River, WV. 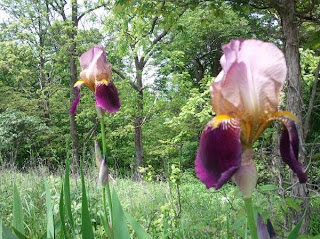 :) I had trials this weekend too! I could not find a sharp cutting blade for the rotary to save my life, and was too lazy to drive aaaaaalllll the way out to the valley to get another one. Sock is looking excellent - as is pattern (I can definitely see it) on the alpaca loom project. Babette - crocheted granny squares?! Wow - the only headache I can see is making sure all your sizes work out and match together!

The beauty of the Babette is that all the squares are multiples of each other so they all fit together. It takes like 16 different colors though, in some pretty nice yarn (I wouldn't want to use Red Heart for this), so it's always been price prohibitive. But I'm a grown up now so I might need to splurge.

Headaches, maybe, but what a beautiful weaving! I just love the pattern! And I saw it before you even said anything....

*sigh* your sock is beautiful! I have such issues knitting and doing SSK and doing it fast that I dread doing something more complicated than a rib right now! (Which means I'll be challenging myself to figure it out soon, I'm sure. ) I just LOVE that sock - the color and the pattern are gorgeous! So close....

Babette - I've been drooling over that for a year since I first saw it... Lovely project!

Well, plus you'll have ends from all those socks, in about the same weight, right? :) That's my evil plan - 14 years from now I'll have enough ends, if I make all socks/hats in the same wieght, to make something 'scrappy'. :)